You are here:
No CategoryironmanNews

Sione Jongstra breathes triathlon. She competed in 8 Ironman 's, including three times Hawaii (2007 as Pro, 2017 and 2018 as Age-Grouper). The last 2 times she became world champion at the Age-group. She has also completed 1 full triathlon Embrunman and another 12-15 Ironman 70.3. We interviewed her about how she prepares for her Ironman 's, how she combines this with a family and work and what she eats during, before and after the triathlons. In short, an interview full of fun insides and useful tips. Read the interview below;

What is your greatest triathlon experience?

Pooh, I actually do have more than 1 great experience. My first and last National titles are special, but also my double World Champion Hawaii Age-Group titles. Also a triathlon in the Czech Republic, which we happened to pass by on an organized cycling vacation, was very special. There was no real transition zone and chickens flew in front of me on the run course. The prize of a shower head, a cassette tape and a photo album was also a real hoot. The kumera triathlon in New Zealand where the order was swim, run, bike and where you got a box of sweet potatoes (kumera) after the finish and I won a free domestic flight which I put back into a trip to participate in the New Zealand National Duathlon Championships where I ended up on the podium. The 70.3 at St Croix is also definitely part of this list. I will write another book about it, but will spare you here;-).

70.3 Ironman or half triathlon I guess around 12-15 times. Furthermore about 10 times a ¾ (4 swim 120 bike 30 run) these used to be the European Championship and World Championship Long Distance races, but this distance is almost not organized anymore nowadays.

Number of shorter distances no idea. At the beginning of this corona time I started a list in excel. I would like to finish this one day. Am actually curious myself how many triathlons I have done. I did come across some very nice memories, photos and newspaper articles and also things that I have already forgotten.

Why did you ever start doing an Ironman?

Because I really wanted to start in Hawaii. The birthplace of triathlon.

Why are you participating in Ironman Maastricht?

These days, this is my "backyard." When I initially heard that there would be a 70.3 distance this year, I was bummed because I had a whole triathlon scheduled in early July and this would be too soon (for me) after the whole. However, this one was cancelled and now it seems very cool to me to start this "home" race. And of course as I am the ambassador of BYE! Nutrition I would love to start in a race where they are partner.

How many hours do you train per week?

That is very variable. Anyway because of corona time but also as a mom I can't always train when I might like to. Sometimes I have an unexpected gift (extra training time) when she can play somewhere and mom has the afternoon off. But then this just has to fit into my schedule. For an Ironman, there are a number of weeks when I hit 20 hours. As there are long training days to be made in the long run. If you train up to 4-5 hours a day, you will not be able to finish the race.

And how do you combine that with family life?

Plan well and train smartly and efficiently. In a family it is a matter of give and take and try to coordinate everything well and guard the harmony. My boyfriend sleeps in every weekend and then I, as a morning person, already have a "half day" with our early bird. These are of course credits for a sports moment later in the day ;-). 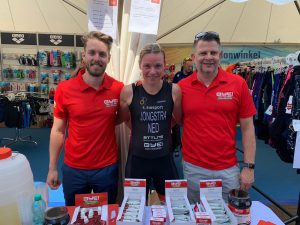 What do you eat during an Ironman?

What do you do in terms of nutrition the week leading up to an Ironman?

Making sure I get enough carbs but also protein. There is no point in stacking unnecessarily because when the glycogen supply is full, it is full. By tapering (training less) you burn less anyway so by continuing to eat well you will stack anyway. To wait until the night before and eat three plates of pasta the night before the race is not wise. This can only cause problems. Also make sure you keep your fluids up.

What else does your preparation for an Ironman look like?

This is different now than it was before. Many athletes start too early with long distances and blocks. The body gets tired and they are already burned out on race day. In addition, these workouts also take a lot of energy, which can also lead to "underweight". In an Ironman, it is better to be half a kilo too heavy than too light. On the day itself you cannot eat what you burn.

What do you do after an Ironman to recover as best as possible?

I don't run hard for at least a week. I do some active recovery, walking, small piece of cycling or swimming and after a few days a sports massage. If possible, a trip to the sauna. Above all, do not do too much and the first weeks do not want to train too intensively but recover and enjoy your performance.

Which part in triathlon is your favorite and why?

I like all 3 parts, but with cycling you see the most and get the most far. So especially when abroad, I find it a fun way to explore.

What is your favorite workout?

A long bike workout in the mountains with a delicious coffee/cake and/or lunch stop along the way or swimming in the sea in e.g. Hawaii. Just like an aquarium.

How many triathlons do you do a year and why so many?

This is also very variable and depends on my main goal. If my main goal is a longer distance I do less races. In the days when I only did the standard and sprint these are more. There are a lot of athletes who want to do too many races though. Everything is fun, but if your main goal is to peak at a certain race(s) you also need quality training blocks. Before a race, if you want to perform well there, you still need to tap and recover (sometimes traveling far too) and if you do that too often you miss out on important recovery and training time.

Why should anyone do an Ironman?

No one should do an Ironman 😉 and I would definitely recommend starting with shorter distances. But once you are hooked it is the ultimate challenge an Ironman. You can often do more than you think. In my first years I said I would never do an Ironman (full). My advice is to do it under supervision if you are new to the sport or training. A whole is certainly not 2x a half and certainly not 4x a standard distance. The fourth discipline is no longer the switch but nutrition and mental.

And in closing what is your best tip for those who want to do an Ironman?

Actually, it is already described above. And importantly also stick to the predetermined plan (heart rate/power and nutrition) during the race and don't let other athletes drive you crazy. It's a long day and this one can get much longer otherwise.

THE MUNRO MISSION 2023 BY GEERT VAN NISPEN AND JAN FOKKE OOSTERHOF ; RUNNING TO TIE TOGETHER 282 MOUNTAINS IN SCOTLAND
13 december 2022

What is the difference between hypotonic, isotonic and hypertonic sports drinks and how can they improve your performance?
4 oktober 2022